A short history of Visions FCU

Since its inception in 1966 the Visions Federal Credit Union has been serving its members in the ENDICOTT, New York area with exceptional financial products. You can find their current interest rates on used car loans, new car loans, 1st mortgage loans and interest rates on both fixed and adjustable mortgages here on these pages. Currently led by Tyrone Muse, the Visions FCU has grown its membership to over 186,954 with assets of more than $4,055,242,727. They have a main office and 46 branch offices. Please see the credit unions website or contact them by phone at (607) 786-2000 or email them at webmaster@visionsfcu.org to get exact details . There are many other credit unions in the local area. See them all here. Credit Unions in ENDICOTT, NY.

General Information For Visions FCU was taken from their 6/30/2017 quarterly report, which is the most current available public information. 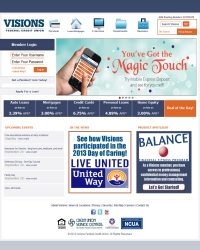 Copyright © 2020 by USACreditUnions.com
All Rights Reserved.